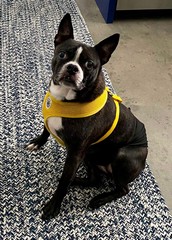 Noah is a chill 8-year-old male. He spends most of his day giving kisses and hanging out but enjoys going for walks and car rides, too. He’s a bigger boy, weighing in at 27lbs. Noah spent most of his life in a cramped trailer with several other dogs that liked to pick on him. His foster home has 4 other BTs. When he first arrived, the girls made him very nervous when they would bark at each other. But after a few weeks, he’s learned to ignore their ‘conversations’ as long as they give him his space. He's now OK with hanging out with them outside in the sun. He likes to be near his human. If you leave the room, he likes to come too. Noah’s not into toys, but loves treats! He sleeps well in a crate at night as long as it’s in the same room as you. Noah would flourish in a retired home or with people who work from home. He seems to be doing well with the kids in his foster home and he’s not been tested with cats. Another dog with a mellow temperament like his would be great, but he’d be cool as the only dog, too. Update: Now that Noah's been in his foster home since Christmas and is feeling much better from a herniated disc, he's started interacting with a couple of the girls at playtime! He is being fostered in Bartlesville and his adoption fee is $250. Apply Today!

Get in Touch with Us

Fill out the form below to send us an inquiry. For all other questions, or to reach us directly, you can email us at btrescueoklahoma@yahoo.com. If you are looking to adopt one of our dogs please first look at our adoptable dogs album http://bostonrescueoklahoma.org/adoptable-dogs and then apply here: https://form.jotform.com/70368678829172 (please allow at least a week for us to contact you about your application). For all other questions please fill free to contact us.

Address:
Muskogee,OK 74401 (Dogs may also be located in Tulsa and OKC with their fosters)